The aim of the project was to develop and manufacture a bidirectional high-performance converter which, among other things, meets the requirements for charging and discharging vehicle batteries. Galvanic isolation was a basic requirement and was solved with an efficient resonant converter. The efficiency is between 92 and 95%, depending on the operating point. In order to meet the growing needs of increasingly powerful charging technologies, the converter, which can be operated in 2-quadrant mode, can be cascaded as often as required, allowing any desired output power to be achieved. For the current DC source sink, an output power of 500kW has been realized. For different test scenarios, the two buck converter bridges can be flexibly switched internally. Individual series and parallel circuits possible with individual modules for any output voltages and currents. With the current control time, jumps from 10% to 90% can be executed within one millisecond. The integration of the control unit is realized with CAN-BUS and EtherCAT. Thus, the manipulated variable can be transmitted to the microprocessor-controlled buck converter bridge from outside. 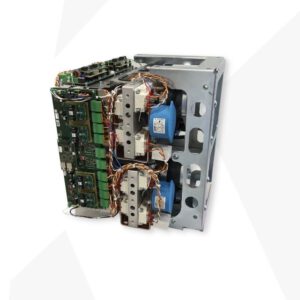